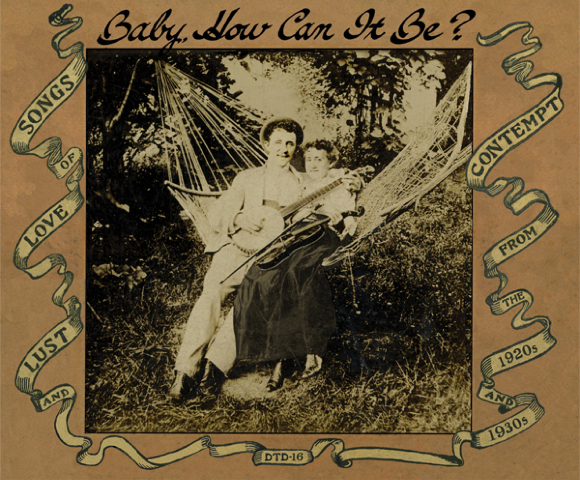 The 3 CD set–Baby, How Can It Be? Songs of Love, Lust and Contempt From the 1920s and 1930s–originates from the rare 78-rpm collection of musician John Heneghan. This Dust To Digital release includes liner notes by Nick Tosches and a centerfold illustration by R. Crumb.

These songs cover a wide range of emotion in love’s roulette wheel. The music—old jazz, blues, and country—evokes eternal pictures of true love, murder blues and cravings of the flesh. Many of these songs you’ve never heard, but you should. Every song tells a story on this rare collection.

Honorable mentions on Disc One—Love—include Bo Carter’s “Baby, How Can It Be?”, Norridge Mayham and His Barbecue Boys’ “If I Had My Way”, Charlie Burse with the Memphis Jug Band covering “Insane Crazy Blues” and Banjo Robinson’s “My Four Reasons”.

Disc Two—Lust—gets down to the nitty-gritty. Essential tracks emerge as “Pussy” by Harry Ray, “It’s Heated” by Frankie Jaxon, “There’s More Pretty Girls Than One” by Rutherford & Foster and “How I Got My Gal” by the Clyde Evans Band.

Disc Three-Contempt—wades into darker water. The songs are not for the weak-hearted. Gems on this disc count as “Married Girls Troubles” by Hazel Scherf, “Some of These Days” by Cab Calloway, “Big Leg Blues” by John Hurt and The Mississippi Sheiks’ “The World Is Going Wrong.”

Nick Tosches hit the nail on the head when he wrote the liner notes about this package: “As is commonly recognized, or so at least it should be stated for matters at hand, the 1920s and 1930s represented the golden age of the love song. ‘Baby, How Can It Be? Songs of Love, Lust and Contempt’—don’t forget that odi-et-amo angle—‘from the 1920s and’30s’ reflects that age of gold resplendently. Chosen from the collection of John Heneghan, the sixty-six recordings here are alive with more cooing, kissing, cupidity, cussing, and killing than lifetimes of longing, heavenly and demonic, could ever aspire to. Talk about a handful of young roe and its discontents. As them Hebe smut-hounds of old used to say, you ain’t heard nothin’ yet…”

Read more about Dust To Digital in Insured Beyond The Grave…