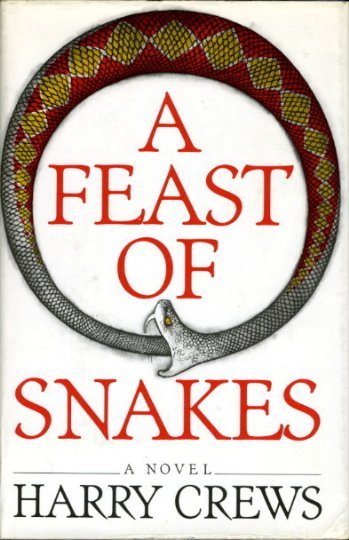 November in Mystic, Georgia, means it’s time for A Feast of Snakes. This novel remains one of the Georgia writer Harry Crews’ finest books. The storyline finds the reader at the location of the ‘Annual Rattlesnake Roundup.’ Moments of gritty hilarity and haunting sadness lure the reader into a heart of darkness.

Surly, snake-oiled crusaders slither through these serpentine scenes with an unsettling festival most folks call lunacy. Crews’ prose serves as testimony to a culture hidden from city slickers and suburban pilgrims.

An undercurrent of south Georgia voodoo lingers throughout this classic. Crews’ literary landscape always proves interesting. “The rattlesnake roundup had been going on now as long as anybody in town could remember, but until about twelve years ago it had been a local thing, a few townspeople, a few farmers. They’d have a picnic, maybe a sack race or a horse-pulling contest and then everybody would go out into the woods and see how many diamondbacks they could pull out of the ground. They would eat the snakes and drink a little corn whiskey and that would do it for another year.

“But at some time back there, the snake hunt had started causing outsiders to come in. Word got out and people started to come, at first just a few from Tifton or Cordele and sometimes far away as Macon. From there on it had just grown. Last year they had two people from Canada and five from Texas.

“Mystic, Georgia, turned out to be the best rattlesnake hunting ground in the world. There were prizes now for the heaviest snake, the longest snake, the most snakes, the first one caught, the last one caught. Plus there would be a beauty contest. Miss Mystic Rattler…”

Read my interviews with Harry Crews in Insured Beyond The Grave.