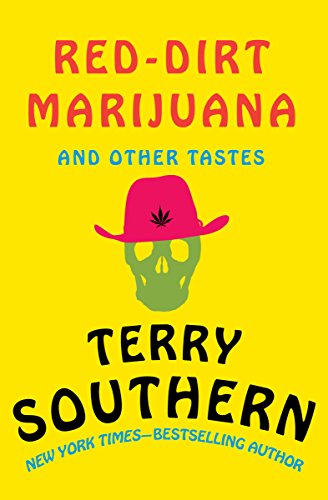 This morning, I re-read the Terry Southern short story “Razor Fight”. The dark tale reveals how two gambling brothers resolve a disagreement with knives. “Razor Fight” is the second story in Southern’s collection Red Dirt Marijuana and Other Tastes.

Born in Alvarado, Texas, in 1924, Southern earned two Academy Award nominations for the screenplays Dr. Strangelove and Easy Rider. As a novelist, Southern’s books include Flash & Filigree, Candy, Blue Movie, The Magic Christian, Virgin and Texas Summer. He also wrote screeplays for The Loved One, The Collector, The Cincinnati Kid, Casino Royale, Barbarella, The Magic Christian and End of the Road.

As a young man, Southern fought in the infantry at the Battle of the Bulge. He later kept spent time with Stanley Kubrick, William Burroughs, the Rolling Stones, Peter Sellers, Jean Genet and Dennis Hopper. Among many other cultural and literary accomplishments, Southern appeared on the Beatles’ album cover of Sgt. Pepper’s Lonely Hearts Club Band.

The Crow brothers catch up on lost time over a dice game, but as they continue drinking and gambling things turn ugly between them. As Southern wrote: “So they came together, in the center of the room, for one last time, still smiling, and cut each other to ribbons.”

Southern’s sharp writing will leave a scar on you. Terry Southern died in 1995. Explore his work. Read my Southern story in Insured Beyond The Grave Vol. 2.