Widespread Panic: Dirty Side Down 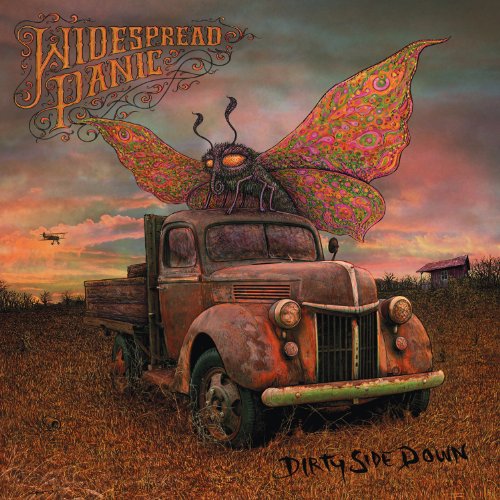 Dirty Side Down, Widespread Panic’s 11th studio album, returns to the group’s old John Keane-Athens sound. Few bands have been together as long as John Bell, Todd Nance, Dave Schools, Sunny Ortiz, John Hermann and Jimmy Herring. Like most Panic albums, it only took about six weeks to record Dirty Side Down.

In many ways these 12 songs retain the old Panic musical tonic, but mark a new creative landscape for Panic. “Saint X” opens the disc with Herring’s jazzy guitar intro that morphs into a gritty rocker. Jerry Joseph’s “North” counts as one of the songs Panic’s played in the past, but for the most part all the Dirty Side Down songs are new.

The title track ranks as one of Panic’s finest songs in their discography—hands down. The cover of Vic Chesnutt’s “This Cruel Thing” sounds outstanding. Herring’s guitar work proves heart-rending on this emotive tune. “Visiting Day”, a swampy rocker, sounds vaguely reminiscent of Johnny Winter’s “Mean Town Blues” that carries an infectious groove.

“Clinic Cynic”—a great catchy country-ish tune, proves the group’s muscular versatility complete with Hermann and Keane’s deft musical coloring. The jazzy instrumental “St. Louis” indicates Jimmy Herring’s complex style, tone and influence on Panic’s sound. “Shut Up and Drive” stands as a gem. The song’s sidewinder sound and the band’s ability to change a mood on the drop of a dime will make this a live favorite. When Bell sings “Cactus shadow in the blue moon light/Let’s not get fooled by hindsight” you know this is Panic in the here and now.

Daniel Hutchens co-wrote “True To My Nature” with Panic, and upon hearing the lines “Those sassy girls dressed in whispers passing by/I’m bored right out of my mind” one embraces the changes this band has endured in 25 years. “When You Coming Home”, a quiet melodic ditty, fits Bell’s voice perfectly, augmented by Keane’s sonic production that makes for easy listening.

“Jaded Tourist” may serve as an anthem for New Orleans as Hermann sings about “Waterlines in the alley” with a Crescent City/Little Feat musical backdrop. “Cotton Was King” closes the album. It’s the closest I’ve ever heard Panic come to heavy metal, but upon hearing a recent live version of the song, they already changed the dynamic of the tune. Dirty Side Down captures Widespread Panic still at the top of their game…