Willie Nelson: The Facts of Life and Other Dirty Jokes 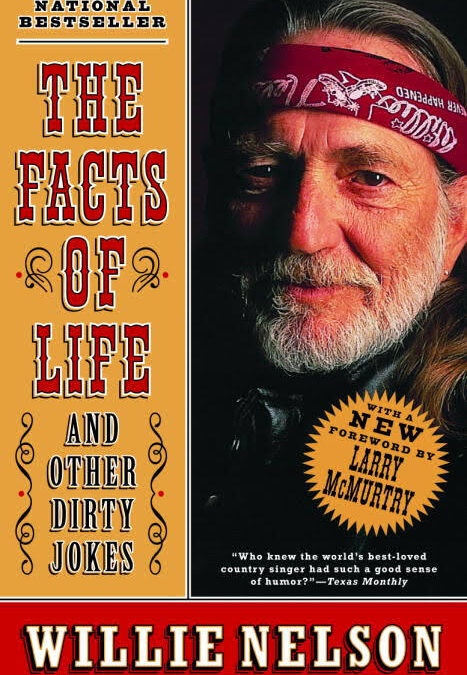 One can’t trifle or jest over Willie Nelson’s legendary status in American music. With over sixty years of songwriting, one hundred albums, countless hits, and thousands of shows, Ol Willie’s discovered another way to tell a story. The Red-Headed Stranger’s book, The Facts of Life and Other Dirty Jokes, compiles stories, wisdom, humor, and song lyrics into an insightful, light-hearted, and at times, hilarious read.

For those easily offended and politically correct–beware! A typical joke from Nelson’s book goes, “Roger Miller said it must be true that the longer you live with your pet, the more you look alike. My neighbor came over this morning and chewed my ass out for shitting in his front yard.”

Willie’s ornery style makes for easy reading. “The more I talk about my hometown Abbott, Texas, the better. Not only is it the only hometown I have, it is by far the most educational spot on the planet. I honestly believe I learned more in my first six years in Abbott than I’ve learned since. smoking, drinking and cussing are definitely three subjects in which I excelled.’

The book contains an abundance of lyrics from enduring songs such as “Hello Walls”, “Time of the Preacher”, “Funny How Time Slips Away”, ‘Darkness On the Face of the Earth”, “Night Life”, ‘Family Bible”, “Crazy”, “Home Motel”, “Three Days”, “Mr. Record Man”, and “Healing Hands of Time”, deconstructing words from the music and invoking the poetry of a great American songwriter.

Never ruminating upon past problems like in his first book, 1988’s Willie: An Autobiography, Nelson muses upon various career experiences in The Facts of Life, including his timeless cause–Farm Aid. Lyrics for “Heartland”, a song he wrote with Bob Dylan, prelude Willie’s veritable “Five Point Agenda for Saving Family Farmers and Reclaiming Rural America.”

Nelson also reasons the bad part about smoking weed: “…too expensive…smoking too much gives you bronchitis…you’ll smell like a skunk…and every time someone says anything negative about smoking pot, you become somewhat hostile and stark yakking about how hemp could save the world, you start quoting page after page of The Emperor Wears No Clothes, and you wind up only sounding like a pothead trying to justify your habit. My advice would be just cut back and shut up. Amen.”

At every turn, Willie’s humor peppers the book, just like the joke about his friend Bee Spears: “When Bee was a little boy, his brother went to his mother crying, ‘Mama, Bee wrote s-h-i-t on my little red wagon.’ His mother said, ‘It’s alright. We can wipe it off.’ Bee’s brother said, ‘But Mama, he used a fucking nail!”

Emmylou Harris once said, “If America only had one voice, it would be Willie’s.” The Facts of Life and other Dirty Jokes serves as a fine reading companion and a direct source to Willie’s spirit–it’s like sitting next to a great storyteller spinning his tales while the bus rolls down the highway…

Read the Willie Nelson story in Insured Beyond The Grave Vol. 2.