Craig Johnson’s As The Crow Flies 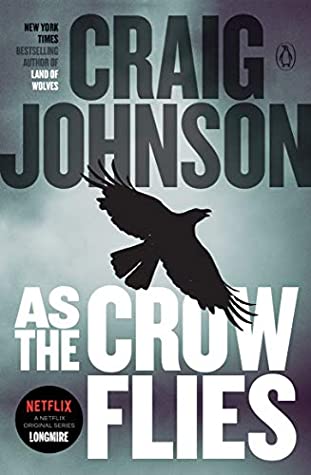 Last Friday I visited Maggie Mae’s for breakfast. While I waited for my eggs, hash browns and bacon I noticed a small bookcase in the back of the diner.

I scanned the books and pulled Craig Johnson’s 2012 As The Crow Flies off the shelf. I never read Johnson, but I perused his bio and the story interested me. The good folks at Maggie Mae’s let me keep the book. I left a nice tip…

Born in Huntington, WVA., on January 16, 1961, Johnson graduated from Marshall University. Johnson now lives on a ranch he built in Ucross, Wyoming (population 25). He’s written 20 books. His latest, Land of Wolves, will hit the streets in September 2019.

Johnson’s books have been translated in 14 languages. He’s won numerous literary awards and some of his books have spent time on the New York Times Best Seller list. In 2012, the A & E network premiered Longmire, which can now be seen as a hit drama on Netflix. I’ve watch seven episodes since reading As The Crow Flies.

Like all Walt Longmire books, As The Crow Flies transpires in the fictitious Absaroka County in Wyoming. This book counts as the eighth in the series. Sheriff Walt Longmire’s daughter, Cady, is getting married in two weeks, but Longmire becomes distracted when a woman and her baby are thrown off a Cheyenne Reservation cliff.

Longmire relies on his old friend Henry Standing Bear to help navigate this crime. Longmire, a widower, forges his way through these high stakes with a inspiring ease. The beautiful Chief Lolo Long emerges as a strong character in this tale where the federal government and the Cheyenne Tribal Police clash, which provides a glimpse into politics on ‘The Rez’.

Johnson’s writing proves concise. His dialogue advances the story in every line. Vintage trucks emerge in this contemporary story as well as casinos, Western bars and vivid descriptions of the pastoral Wyoming landscape that gives the book a cinematic quality.

Writing about a peyote experience is difficult, but Johnson pulls it off when Longmire must experience a sacred ceremony with reservation elders to see his own vision. Native American tradition weaves a vibrant tapestry through the 308 pages.

By the time Longmire ingests peyote–around page 122–the story accelerates and the reader continues on–with few breaks–until the end. The characters on the reservation such as Audrey Plain Feather, Clarence Last Bull, Loraine Two Two, Herbert His Good Horse, Artie Small Song and FBI agent Cliff Cly propel the mystery until the end.

As The Crow Flies counts as well-written storytelling. I’m glad by happenstance I read Johnson’s book, and I will read others. That’s how I discovered Craig Johnson in a small coastal Georgia diner…

I’ll leave you with a little Native American wisdom that echoes through As The Crow Flies: “ Stay calm, have courage, and wait for a sign.”