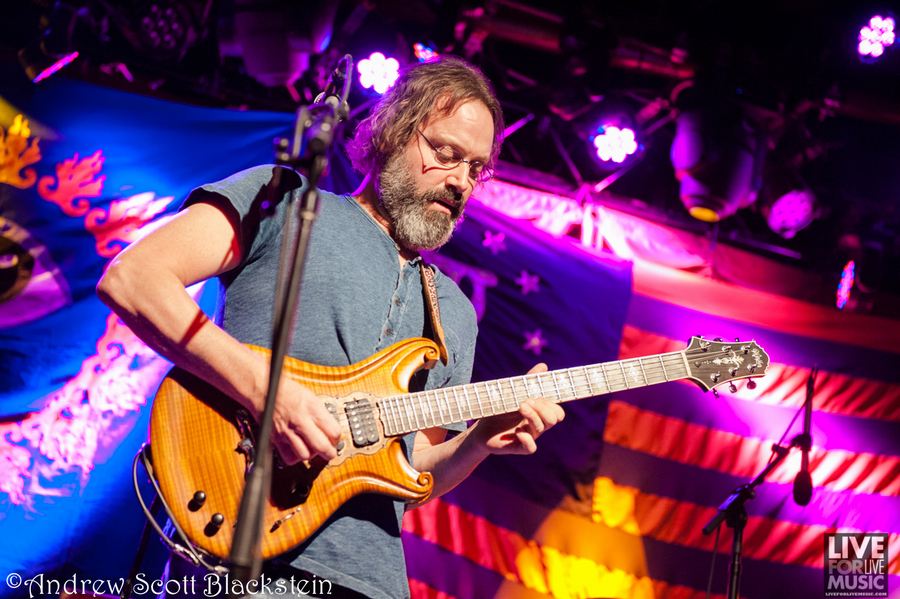 Neal Casal stands as a musical journeyman. He just released his tenth solo album titled Sweeten The Distance on April 10. The collection captures Casal’s resonating songwriting and musicianship. Recently, Casal has recorded with Vetiver, The Beachwood Sparks, The Jayhawks, Fruit Bats and Ryan Adams & The Cardinals.

Casal currently serves as the lead guitarist in Chris Robinson’s group, The Chris Robinson Brotherhood. Casal plays on the CRB’s upcoming two albums–Big Moon Ritual and The Magic Door. Casal will hit the road with Robinson in June. Until then, he’s out supporting Sweeten The Distance.

In this 2012  interview, we discuss Casal’s latest release, recording with Willie Nelson, Ryan Adams, various musical endeavors, The CRB and Casal’s austere photography as well as his book The View of Other Windows. He’s got a busy year ahead of him. Keep your ear to the ground for his work…

Neal Casal: Thanks very much James.

JC: Are these all mostly new songs?

NC: Yeah, they’re all written within the last two or three years. It was a pretty compact time frame.

NC: Yeah, there’s certainly some thread of melancholy during this record I suppose. The time period I was going through when I was writing these songs there were big transitions going on for me. Tidal shifts. It was the end of a lot of things, and the beginning of some new ones. I was moving across the country from New York back to California. It was also the end of being in The Cardinals with Ryan Adams–that was coming to an end. I was realizing that group of friends was changing. There were personal things going on as well. Any time you uproot yourself–especially moving from one end of the country to another–it’s going to affect you. Big tidal shifts were going on, and I think these songs reflect that. So, yeah, there’s a little melancholy there…

JC: But at the same time…there’s positivity. It’s not a scathing, venomous collection…

NC: Absolutely, it’s not bleak at all. The music and the tone have a melancholy quality to it, but if you really get below it–particularly the title track–it’s one of the best songs, most positive songs I’ve ever written. Upon first listen, you might think this is a sad thing, but I think it requires a few listens to get the full scope of it.

JC: Yeah, I really like the title track, “So Many Enemies”, “Bird with No Name”, “Gyrls of Winter”…they resonate on a personal level. It’s hard to find that personal thread sometimes with music or any art you come across that hasn’t had the chance to stand the test of time.

NC: That’s why the records mean what they do to us. That’s why I play music. That’s why you write stories. That’s why we’re speaking to each other. We have that common bond. Not every record is going to speak to a person that way, but when you find one that does…

JC: How long did it take to record Sweeten The Distance?

NC: It took about six months. Not six months of working on it everyday. We had some breaks to reflect on what we were doing. It was a big thing for me not to rush this record. I’ve done that before, and I don’t do that anymore. I refuse to rush the record making process at this point. Some of my earlier work suffered because I was trying to meet some imaginary deadline. When it comes time for me to record now, my only rule it’s finished when I say it is. There’s no strict tour guidelines because it’s too important to get the music right.

It takes more time than just a few weeks to do it. I want it to stand the test of time. I need a little time to work it out. It wasn’t hated work. Thom Monahan and I worked meticulously on this. Thom Monahan is amazing. He really is. He brought so much to the project that I can’t say enough about him. We’ve worked on a few things together, but this is the first record he’s ever produced for me. He’s an incredible engineer, producer, mixer and he has an amazing concept for each record. It’s not just about recording for Thom. He takes time to listen. He’s been involved with a lot of great records.

JC: Talk about the musicians who played on this album with you.

NC: John Ginty has played with me forever. He was in Robert Randolph’s band for a long time. John has played with me since my first record in 1995. He’s been on every one of my albums. Dan Fadel and Jeff Hill–the rhythm section–I also have a deep history with. they have played on my last three solo records. I was in a band with them called Hazy Malaze. Jon Graboff played guitar and pedal steel in the Cardinals with me. We made several records together.

JC: How did you cross paths with Ryan Adams?

NC: I’ve known Ryan since the 90s. I met him back in the mid 90s when we were both songwriters, making our way and getting our acts together. I met him in Austin at an early SXSW. We always had a good connection that went beyond explanation. We jammed informally. We always had moments where we’d raise an eyebrow and say ‘Hey!’. Then we went our separate ways. Then I ran into him on the street in New York in 2005. He told me he just lost a guitar player and he asked me to join. The time was right. We made a record with Willie Nelson–so much came of that time. It was a very creative and fertile time for all of us.

JC: I wanted to ask you about recording with Willie Nelson….

NC: Yeah, it was pretty heavy. Ryan produced that record, and the Cardinals were the band for it. It was just amazing. I remember sitting at the piano teaching Willie to sing Fleetwood Mac’s tune “Songbird”, which ended up being the title of the record too. Willie didn’t know the song. I distinctly remember Ryan telling me, ‘Neal, go sit at the piano with Willie, and teach him that song.’ So, I sat down next to Willie and taught him a song. It was a pretty big moment for me.

JC: You lived in California before you joined the Cardinals, right?

NC: I did, yeah. In the 90s I lived in New York primarily. Then I moved to Los Angeles. I lived in L.A. from 2000-2004, which during that time I did a lot of solo stuff and played in this band called the Beachwood Sparks. They are another band Thom Monahan produced. He’s produced their new record.

JC: Don’t you play on the new Beachwood Sparks album?

NC: Yeah, I did. It comes out in June. It’s a beautiful record. In 2004 I moved to New york to make a solo album. There was a producer there I wanted to work with and that’s when I ran into Ryan. I ended up staying in New York for five years.

NC: Yeah, we were supposed to play the Greek Theatre on 9-11. Of course, we didn’t. That was a really weird period of time. Then we played New York. We did four nights at the Beacon Theatre. It was a few days after 9-11…it was heavy. So, when the Beachwood Sparks opened up for the Black Crowes, that’s how I really met Chris Robinson.

NC: Yeah, I’m on a few songs. Those are all great records, great musicians. Yeah, the band I’m in now–The Chris Robinson Brotherhood–we just made a record that is coming out in June. We also have another record coming out in the fall.

JC: Before that you have some shows to play to promote Sweeten The Distance…

NC: Yeah, I’ve got a few shows in Philadelphia, New York and I’ve got some studio stuff to deal with. I’m going to do some shows in England during May. Then in June the CRB record will be released, and we’re going to go on the road for several months.

JC: I want you to talk about your photography. How long have you been taking pictures?

NC: I haven’t been taking pictures that long–not even ten years. I started getting serious about photography because it was a way to make life on tour bearable. Constant touring can be extremely disconnecting. I was forgetting all the places I’d been, and it’s a great way to enhance an artistic life. The times that I wasn’t playing music–this was another artistic pursuit that I could get into. Photography and music just go hand and hand. They work well together. I found a symbiotic relationship between the two. It’s great to document all the things I do.

And not just music, but life in general. I started doing it for myself. I had no ambitions about it at all. I had no confidence that I could do it on any real level. Then I started posting some pictures on my website for fun and then people starting reacting to them. Then inevitably because I was taking so many photos of musicians in intimate environments that other photographers couldn’t have access to, my photos started getting used for things. The greatest result of all that was the book I had put together through all my years with Ryan Adams and the Cardinals was put into a book. Two years ago a book of mine called The View of Other Windows was released on a really prestigious publisher.

NC: I hope so, but there’s no immediate plans for it.

JC: Good luck out on the road. Hope to see you soon…

NC: Thanks James. You too man…