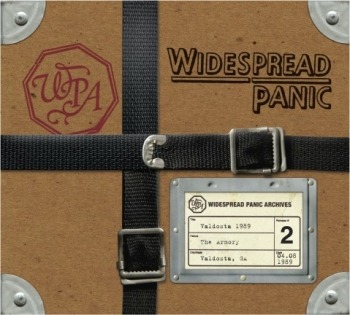 Volume 2 of the mighty Widespread Panic’s Archive Series serves as testimony to the band’s power as an original quartet: John Bell, Michael Houser, Todd Nance and Dave Schools. The great Jim Oade recorded this amazing show from the backseat of his car in the parking lot of the Armory in April 1989.

The show captures songs from Panic’s first record, later reissued by Capricorn —Space Wrangler—with 50 people in the audience. There’s even a little Civil War trivia embedded with this release for cognizant listeners. A flawless “Porch Song” reminds one of how good they were in the late 80s—a weak era of the music industry. “Space Wrangler” reveals the band already carved a foothold for their music.

These songs really return me to living in Athens in the late 80s. I even lived in Valdosta for a few months in 1987. It’s different when you’re around at the same time a band develops—you remember where you were when you first heard a new song from a contemporary band. I love the Stones’ Exile On Main Street, but I was four when it was released. I love the record but it doesn’t not retain the same cultural backdrop in my personal timeline the way these early Panic songs do for many folks in the third and fourth musical generations of the South’s wellspring of musical lineage.

One of the band’s oldest covers, J.J. Cale’s “Travelin’ Light” indicates how focused and cohesive these guys were by this point. David Byrne’s “Heaven” is covered next, but Panic surpasses—for me—the original version. A side-winding “Conrad”, an old stand-by that remained in the band’s live arsenal through the years sounds strong. “Holden Oversoul” evokes rustic images within the lyrics: “The screen door to the farmer’s porch/To the back porch to the backlands/It’s never left closed…”

“Stop-Go”, another Space Wrangler tune, spins a road song. Yet, even as a quartet, nothing is missing. Next, Jerry Garcia’s “Cream Puff War”, which was rare because the band always shied away from Grateful Dead covers. The gritty riffs in “Pigeons” ranked so hefty of a tune they included it on their self-titled second CD. “C.Brown”, another song that appeared on their second CD, tells a story about a character we all know. “Coconuts”—an old favorite contains the hypnotic groove many bands felt happy to adapt and classify themselves as a jam band, which Panic never intended as a classification of their music.

Disc Two begins with a “Jam”. Onward onto the composition titled “A of D”, and a metamorphosis into “B of D”, which makes for a quite a musical journey. More songs from the second CD, “I’m Not Alone and “Barstools & Dreamers” rotated through the years during the band’s shows. “Driving Songs” prove these earliest tunes were formidable enough compositions to remain in the performance list through the years.

Horace Moore’s liner notes indicate the band’s early intention that encapsulated their spirit on that spring night in Valdosta: “a quick look back through the years shows Widespread Panic in 1989 ready to truly earn the road warrior label. Until that time, other responsibilities and non-stop practicing kept them closest to home…annually averaging about 80 dates in seven states. For the next five years, those averages would double indicates and quintuples in states. Anyone who has traveled for a living, a passion or a combination of both appreciates both the opportunities and difficulties provided by that type schedule and commitment.”

Dave Schools summed up this Valdosta performance in the Widespread Panic film, The Earth Will Swallow You: “…That’s when we were a four piece rock and roll band and we used to scare all the hippies off…”

Valdosta 1989 ranks as an essential gem for the organic progression of Widespread Panic. Read my definitive Todd Nance interview in Insured Beyond The Grave Vol. 2.